from datasheet of BK3254 bluetooth module, we know that CPU is BA22, there is posibility that cpu in bk8000L is the same, so I searched "ba22 openocd" and found this post:

from which I take jtag HW and SW part

patch for generic FT232H board

and add this line to ftdi_driver.c file

How to modify washer fluid reservoir on the Audi A4 (b5 platform) to support the headlight washer pump and level warning switch for water level.

Positions of new components after the modification:

Check the previous picture for the exact position for the switch. The hole needs to be 25mm wide, I use the wood drill (see the pictures). Simply place the rubber seal on the reservoir and mark the center of the seal. Be careful while drilling to avoid damage to the reservoir. After the hole is drilled, clean up edges.

There is a mark on the water tank at the position where the pump should be mounted. I use a 20mm drill for wood, gently to avoid damage to the reservoir, then clean edges. After drilling and cleaning are done insert rubber grommet for the pump, use some water as lubrication. Then install the pump. Wires for the pump must be at least 2.5mm2. The connector could be the same as for windscreen just connector on the pump must be modified, little notch on the connector must be cut flush.

If you have a problem with your radio reception it is possible that your radio is shutting down power for the amplifier in your antenna. I do not know why it is, just that output is controlled by the RDS processor, which will shut it after 5seconds.  So simple solution is simply emulating signal from the RDS processor. 1resistor(10k SMD 0805) need to be desoldered and then turned 90 degrees so one side is still connected to the base of the transistor and other side can be connected to ground, check pictures:

After this mode, 12V DC is on antenna input jack, the only problem which probably raised up is that this setup is probably not protected against short to ground, so be careful and check your cables in your car!

EDIT: radio will not disable 12V on antenna input if around 2.5mA is drawn from it, so 390Ohm resistor should do the trick, use 1W, it can get hot!
EDIT2: soft coding of radio will change nothing.

Old audi radios concert and chorus (1st gen) are here for almost 20years and flex cable connection to front panel LCD is most likely gone on all of them. Recently I found a cheap solution ( around 10euros). This is not well tested ye, but what can we lose?

(updated: ) take pictures before you disassemble it

To fix this we need a new cable, I sourced mine at aliexpres (but only 2pcs required). If it will be no longer available simply search for bmw e34 dashboard speedometer flex cable, check this search on aliexpress. You also need T-tip iron similar to this one.  You can buy a combo of cable and iron, but unfortunerly these combos are most time 1cable and 1 iron and you need 2 cables.

When you will have required cable and iron

- while old cable is attached to LCD mark position of tracks on the LCD on both left and right side of LCD, use permanent marker which can be then removed with alcohol, but test if it can be removed or use transparent duct tape. Nex step is to take old flex of lcd and PCB.

- clean in with IPA. The cable need to by extended, to accommodate for more tracks required. I simply cut one side of cable to close as possible to track, but not damage it. Then I attache this part of the cable to the LCD with fully heated iron, take your time and align tracks of cable to pads on lcd. You will do not have another chance with this probably ....  then count how much more traces you require and cut it from second cable and attache it.


The cable is longer then required, so updated next step is to assamblle it all together, then place cable on PCB side and mark where it needs to be cut and cut it with scissors.

Audi a4 b5 xenon headlight upgrade

Just to be clear: this can be done with H7 headlights also and you can put H7 in this projectors. Using D2S in original halogen headlight is most likely ilegal so ... do not forget that what you do is your responsibility, use your brain ...

Recently a friend of mine has contacted me, that he develops adapters for bi-xenon projectors into ours AUDI's A4 (B5 platform). So I had to try it, and I'm really pleased with the results, so we made few and sell them, read the whole article to find out more.


This is alternative to re-applying reflective metal coating on stock parabolas in old Audi A4 B5 headlights which is almost the same price as aftermarket headlights. This setup works for both halogens or xenons, facelift version with projectors, stock Valeo or DEPO aftermarket.

Why? Old parabolas are gone

I got my from these 2 stores:

AUTOKI store:
AUTOKI FXR 4.0 2.5inch LHD RHD HID bi-xenon projector (59€ + 5€ shipping), these came with terrible moldy smell, but are same as DLAND from what I can see:

If they sell all, then you must search ali, ebay etc ...  but buy only one which looks exactly the same! 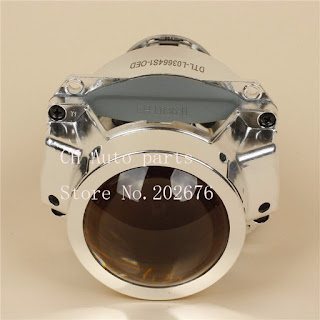 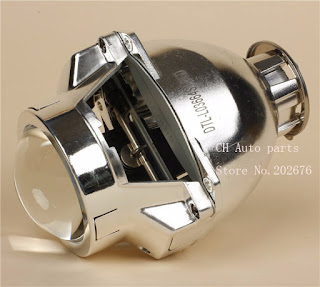 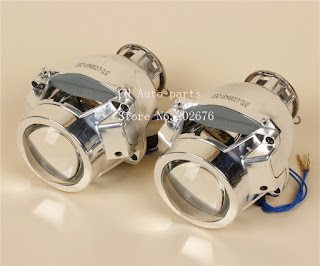 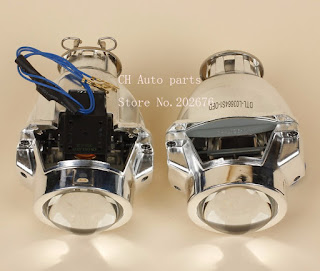 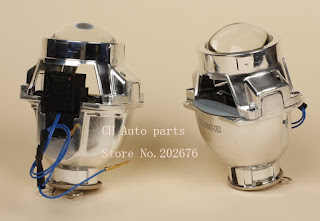 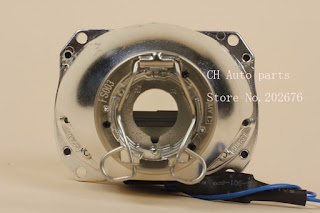 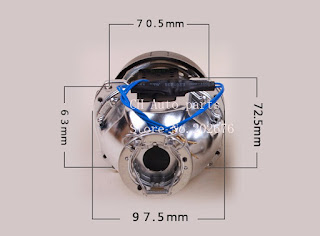 Projectors in my hands: 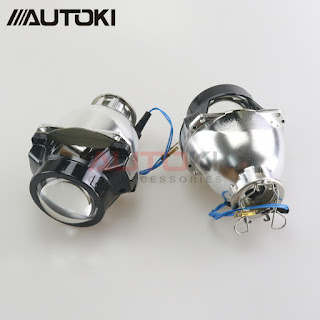 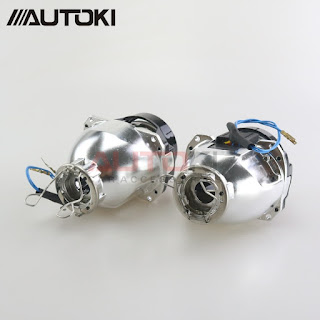 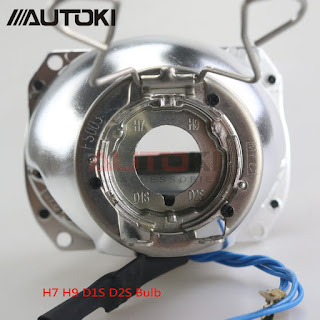 You can buy adapter version for OEM Valeo headlights and depo aftermarket, there is a slight difference in one hole. Personally, I put these projectors only in OEM headlights. OEM headlights (Valeo) for halogen and xenon are identical except for:

- different projector, xenon is bigger, but holes are at the same locations
- internal harness
- xenon ballast
- a sticker which says what should be inside: (d2s + h7 or h7 + h7)

Where to get them? You can buy them at my store at tindie. Price is 30$ + shipping. The adapter is made of 3mm stainless steel. In case you upgrading halogen headlights you will need additional cover plates for the hole where xenon ballast sits (+10$). Kit includes adapters, screws, in case of cover plate +6screws then link to PDF manual, with detail step by step instructions.

- mark original light projection on the wall in front of the car, do not move it, or mark car position on the ground, this simplifies final steps!!!
- mark the position of the headlight on a car and remove them from the car
- protect headlights optics!
- take ballast out of headlight or cut a hole in his place in case of halogen
- take out 3 screws which hold original projector inside
- mark projector assembly in case you want to put it back (which you will not want to

This is how the finished projector looks with mods:

In the place where the hole is drilled, the surface of the projector needs to be filed down so the screw can sit flat on the project. Simply put the screw in the hole and you will see how much to take. In the case of 2 bottom half circles, I simply mark how much to take and then just file it down to these marks. Bulb holder spring needs to be shaped so it does not touch headlight housing in the most upper position, check the next picture how I did it. It is not the prettiest but this is spring wire, hard to change its shape ...

After these steps, we can put the new projector in, then inside headlight put the adapter on new projector place it to its final position and remove protection from optics. Finally, screw it in place with original bolts. Then assemble headlight and put it in the car. In case you replacing halogen projector, put the bottom cover plate in place. In case you are upgrading ballast, the cover plate is a perfect place to drill a hole for it. I personaly use this ballast by DMEX.  Do not forget when retrofitting HID in halogen setup, headlight washer and height adjustment must be retrofitted also, but this depends on local law.

Here are finished headlights and light output, I have set it on the left side a little lower, just to be sure.

all of them have same output around 4500lx at ~3m mark, only FXR 3.0 version need 2 nuts inserted at bottom of bulb to have main beam in the middle, otherwise it will shine to blind of bixenon. But this projector has most light on sides,maybe  next updade will be pictures on road.

As in the previous post, here I am modifying china made festoon LEDs, 41mm in this case. They start to blink after a few months of using them in the interior.  So I ordered new ones (1st were from banggood.com, 2nd set was from aliexpress.com) all of them failed. I have the last pieces which I am going to try with a lower current. From the factory these LEDs are driven at ~160mA with 4 parallel set of 3 LEDs, this means each LED is driven at 40mA.


I use my Samsung to measure the output of these modules, without and with changed resistors.


Update:
There are similar LEDs on the Chinese sites to be brought, with different spacing between LED chips (check pictures). These use the resistive dropper consist of three parallel resistors(3x110 Ohm). Combine current over (4x3) LEDs matrix is 65mA with all three resistors in place, with just two resistor combined current is 50mA and with just one it is low as 25mA. Current over each branch of LED matrix is ~16,12 or 6mA.